Create a climbing culture in your city! 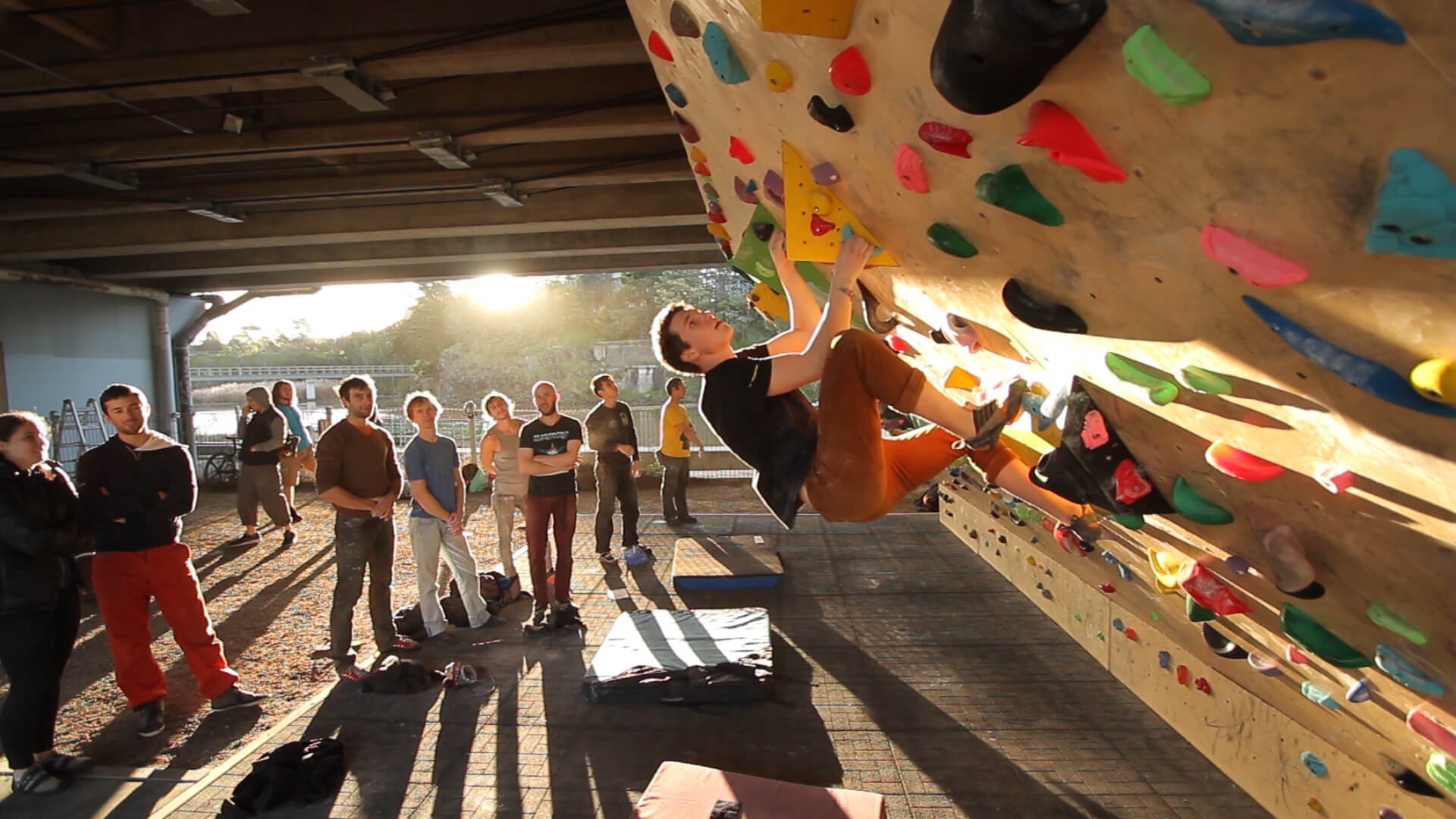 Create a climbing culture in your city!

It’s 6:30am, sunrise, the morning is crisp. I’m out on the streets bright and energized, in a new city, on a new adventure, full of excitement.

As I hop off the tram a few hundred metres from my destination I am guided gently down the street by a cool Spring breeze.

I zig zag through a cute little laneway and along a row of vibrant-looking Victorian terrace houses, a scene that truly defines this city... And Bingo, I have arrived!

Usually, Melbourne would draw you towards its period architecture, its rich lattes and swanky craft brews. This is no typical Melbourne city experience. Today I’ve decided to go on a real urban adventure and dive deep below the city’s chic, cosmopolitan façade. I leave the streets behind me and make my way downhill along an eerie-looking gravel track. I can’t help but wonder if this is really where I am meant to be, I mean this park doesn’t give off an overly inviting vibe, especially in these early hours of the morning.

I continue further down, anxiety growing mildly as I stare into what looks like an abandoned industrial canyon. There are remnants of an old shed and rusty oil drums, perhaps of a bygone era, it’s hard to tell.

Just when I feel like I’m losing my way, I spot it … A substantial piece of architecture nestled so silently within the city’s disused and unloved urban fabric.

Tucked away under the freeway, sheltered from rain and sun, I discover an urban climbing heaven 🙏.

Today’s article is a story of a simple vision from an ordinary group of lads who figured a way to work alongside their local city to bring a climbing culture to life. This is the story of the Burnely Bouldering Wall, located just outside the centre of Melbourne, Australia.

It is this kind of work: the building relationships with local authorities, the gathering of community troops, the organization and the implementation of an entire climbing area in an unused city park, which represents a pivotal step and a much needed blueprint towards a brighter future for urban climbing around the country. And who knows, perhaps around the world, too!

Getting local council approval for a new activity or “use” as they call it requires a ton of paperwork. Because of the tick or flick nature of how development usually gets approved, if a specific “use” or “activity” is written in the law books, then it’s generally available for argument, either for or against.

However when something new comes along, something like an “urban climbing wall” for example, it can be quite a challenge to know how to handle it. This new use becomes a somewhat “grey area” where it’s certainly not not allowed, but is may well be not generally “acceptable” in many instances.

Which is why this particular project, The Burnely Bouldering Wall, is such a sweet story of success. It’s a great example of how we can view climbing as an activity to be further developed in the parks and unused urban spaces around the world!

Coming off the back of a successful Pozible Crowdfunding Campaign to raise much needed funds for the Burnley project, I interviewed local activist Evan Campbell about all things Burnely.

Q: Please tell us a little about the Burnley Bouldering Project!

The original Burnley wall was a glue up, utilising a slightly overhung wall at the base of a free-way on ramp. The wall was conveniently located above a tan barked garden bed on the edge of the Yarra bike trail: perfect for climbers, not so perfect for the toll road operators.

When free-way management took the glue up down climbers complained, the VCC (Victorian Climbing Club) found grant money from Parks Victoria, and the building of new purpose built walls was negotiated between Parks, the VCC, and Transurban (the toll road operators). This is a fairly fact free account of what happened, as I was not around during the time of the original walls.

Q: What have been the biggest challenges in getting it started and gaining momentum?

Being the first of its kind in Melbourne, Burnley was not really subject to any specific planning laws regarding public bouldering facilities, as no such laws existed at the time. I know more recent public bouldering developments such as the Brunswick Boulder, have looked to guidelines for playgrounds while moving through planning phase, but ultimately the idea of public bouldering is new enough that developments are negotiated on a case by case basis, pending on the location, the local community, climbers, and the council.

On the climbing-people front, building support, and then the walls, was not hard at all. The climbing community in Melbourne is large, ever growing, and happy to lend support to any new developments. The building of the walls was managed by climbers and kept cheap thanks to climbing trades people doing a lot of the labour, and obtaining materials at cost price.

Happily, building support among non-climbers is not that difficult either. The appeal of bouldering is obvious: it’s a cheap and safe entry into climbing, with no heights or ropes to worry about. Thanks to Parks Victoria for understanding!

Also, consider what councils are willing to spend on a skate park for example: then explain to them they could spend the money on a facility that encourages physical fitness, caters to women and men, works for 4 year olds to 50 year olds, services an existing community of climbers and promotes an en-vogue boom sport. Explain clearly to people how awesome climbing is, and it’s pretty hard for them to say no.

Q: How did you go about building a relationship with the council/government/other gyms?

As aforementioned, planning is on a case by case basis, so in that sense yes, it can be complicated. The main benefactor by way of grant money was Parks Victoria, the relationship between Parks and the VCC really drove the creation of the walls. This relationship was well established before anyone floated the idea of a public rock climbing facility. The VCC and Parks have worked together for a long time to maintain climbing areas at Araplies and in the Grampians.

The VCC advocate for climbing access, and organise climbers to assist parks in assessing damage to climbing areas post floods/fire, enforcing area closures, establishing and maintaining trails, and generally ensuring that these areas remain safe, undamaged wildernesses to climb in.

Q: Was there any resistance from local climbing gyms?

No. Burnley is a not a climbing gym, and it does not provide a gym like experience. Its undercover yes, but it’s still outdoors, so no temperature control, no thick foam mats, mainly traversing routes, and climbs that only get reset once every 6 months or so.

In fact local gyms have donated route-setters, hold washing facilities and equipment to the cause over multiple resets. They see anything which grows the sport as being positive for their business, and free public bouldering helps to grow the sport.

Q: How easy / hard do you think something like this be to replicate in another city?

Easy enough to have a go at, what do you have to lose? Councils are really starting to come round to climbing. Melbourne now has two public bouldering facilities and counting, and I know other cities are contemplating things, but I don’t want to curse anything with details. I know Shanghai has a pretty sweet outdoor bouldering scene, but I am sure there are many other cool examples all over the world!

Q: What would be some of the first steps you would take?

Signing a partition to establish climbing community numbers and local support is always a good place to start. You will need some kind of financing, so hunting for grant money, or making suggestions about areas where money is already set aside for redevelopment is a smart move.

Q: If you were to do it again, how could / would you do things differently?

Burnley is a pretty good prototype for public bouldering. The walls are nice and protected, made of plywood (a huge plus as it allows us to add volumes and screw on holds easily), and there is a flat wall, a 25° wall, and a 45°, so good variety.

Not having been involved in the initial construction, I can’t comment on any logistical or organisational changes, but as a route setter I’d say our flat wall could do with some angles for stemming in, and I’m partial to the new 100mm thick soft fall at the Brunswick Boulder, but really I’m just being greedy!

Q: How hard has it been getting the word out there about Burnley and building the community?

Not that hard at all! Free climbing is a pretty easy message to sell. The walls have their own Facebook page which makes it easy to keep everyone in the loop. Here you can get status updates on resets, casual competitions or whatever might be happening at the walls. The VCC also promotes the walls through their website, and their magazine Argus.

Q: You guys absolutely smashed your Pozible campaign. Why do you think it was so successful?

Primarily because there is a strong climbing community around the Burnley walls, everyone that climbs at Burnley is happy chip in when the walls get reset, with time, materials, or in this instance money. There was also a clear need for new holds.

The campaign organisers all climb at Burnley frequently, so we knew our target audience well. We anticipated the number of contributors we would have before we began, so we knew we would exceed target. A bit of reading about the logistics of running a crowd funding campaign, a silly video, posters at the walls and the local gyms, and some targeted social media, and that was really it. Having a graphic designer on the route-setting team is pretty handy also!

Q: Where can we find out more about you and the project?

Shout out to the VCC, particularly to Ben, for enduring (and typically endorsing) the always zealous, but at times unhinged ideas of route setters and the broader Burnley community.

Also a shout out goes to everyone who supported the RE-UP campaign for new holds, and the Burnley community in general. And last but not least, I am super psyched with the efforts going on over at BoulderGeist. These guys are doing incredible work and truly bringing climbing to the streets. Be sure to check them out!

If you think you would be a great fit for the Digital Dirtbag series or know someone who might be interested in sharing their story then feel free to shoot through a message on instagram @adventureinmyveins page.

If you’ve enjoyed this article and know anyone else who would too, please share it with your friends!

For those who want to